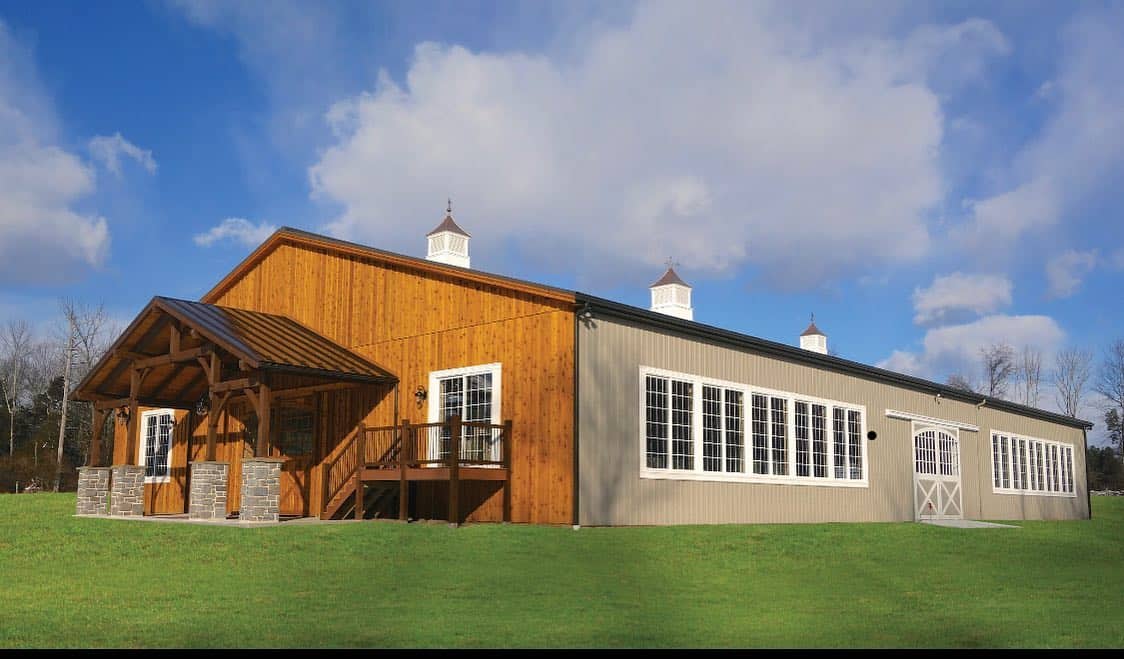 Barns have been in use for centuries. They are used for housing livestock, including cattle and horses, as well as equipment and fodder, and often grain. In the U.S., the first barns were built by English and Scottish settlers and had many specific design features including large double wagon doors on level ground. Interiors were characterized by a center driveway which acted as a threshing floor, similar to a breezeway.

As settlers from Germany began to build barns, especially through the Mid-Atlantic states, the placement of double cross beams was the primary feature of the barn. In addition, they were usually set on a bank with a full basement. These features were brought from German dairy farmers who practiced tending to dairy cows.

Moving into the 21st century, barns have evolved into modern structures equipped with state-of-the-art structural and ventilation systems. Steel and concrete are used as often as wood for structural integrity and longevity.

For those interested in barn architecture and operations, or if you’re considering building or renovating your own barn, this article is for you. It’s brought to you by Quarry View Building Group, whose knowledge and experience building and renovating barns is unmatched. 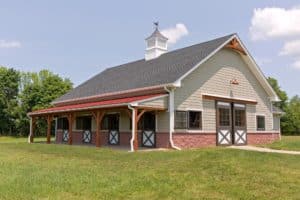 Pole Barns are a structure that has a framing system built of wood roof trusses connected to vertical columns (sidewall posts) and which also has secondary structural members such as wall headers, roof purlins and wall girts to support the exterior cladding (siding and roofing). They’re one of the easiest and most economical ways to build an agricultural building. Whether you are building a simple storage barn, garage or a horse barn, a Pole Barn can be cost-effective and adaptable to many configurations and uses.

Pole Barns are efficient to build because they require no trench work for a foundation. Holes are dug using a tractor auger or a hand posthole digger. They have a high center raised roof that lets hot air rise above the stalls and horses. The design also allows skylights and windows to be installed on each side of the center roofline, letting in more light and additional fresh air. The monitor has two shed roofs with a gable in the middle. Some Pole Barns have Gambrel trusses to eliminate the need for interior post and beam supports, which allows for multiple design arrangements including large open areas for equestrian activities or other activities. 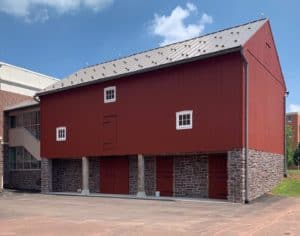 Quarry View Building Group’s barn building prowess was put to the task recently as we worked with the Schwenkfelder Library and Heritage Center in Pennsburg, PA to dismantle, move and reassemble a Pennsylvania German barn to the Center.
This is a perfect example of a bank barn. It was painstakingly disassembled, photographed, mapped and moved timber-by-timber 20 miles from Towamencin to Pennsdale, and then reassembled, restored and attached to the main building via a walkway. It’s a pleasure to restore such a fine example of barn building history for others to experience.

Bank Barns
The Bank Barn gets its name from a simple but clever construction technique: the barn is built into the side of a hill, thus permitting two levels to be entered from the ground. Historically, the lower level houses animals, the upper levels serve as threshing floor and storage. The hillside entrance gives easy access to wheat or hay.

The earliest Bank Barns featured Gabled roofs, while later bank barns were built with Gambrel roofs. Bank Barns were primarily constructed with their axis parallel to the hill on the south side; this allowed livestock to have a sunny spot to gather in the winter. To take advantage of this protection, the second story is extended over the first; the overhang sheltered animals from harsh weather.

Standard Barns
Among America’s earliest settlers were the Germans who brought with them what we see today as the distinctive Pennsylvania Barn. Within that barn classification, there are three recognized variations including Standard Pennsylvania, Sweitzer and Extended Pennsylvania barns.

The key characteristic in identifying this type is the forebay, which is built so that the gable end is symmetrical, with both front and rear walls being the same height. The overhanging second story creates a sheltered forebay area (or overshoot) and the hillside construction through which – naturally or artificially – an earthen slope serves as an easily accessible ramp to the second story of the barn from the rear.

One of the defining characteristics of these barns, especially in Pennsylvania Dutch areas, is the placement of stars, hearts, diamonds, quarter-moons, or other designs painted or carved on their sides and ends. Usually called Hex Signs, these features were brought from Germany and Switzerland to serve as amulets or talismans against witchcraft and be dated back to the Bronze Age. They still remain a fascinating and historical landmark of the region.

Barns remain an important part of farm life. Whether as a working agricultural building or renovated into a home or event space, barns continue to charm with their beauty and historical importance to the founding of our country.

New barns are built with the same modern design and construction features as residential or commercial buildings. They offer simplicity for endless design options yet state-of-the-art functionality and operations, yet retain many of the same features used centuries ago.

For those interested in barn architecture and operations, or if you’re considering building or renovating your own barn, this article is for you. It’s brought to you by Quarry View Building Group, whose knowledge and experience building and renovating barns is unmatched.  Contact us today.