Quarry View Building Group is excited to announce its latest partnership with River Mountain, an exciting new youth wellness retreat designed to get children off digital screens and out into nature to create a life-tech balance. River Mountain in Everett, Pennsylvania is a first-of-its-kind refuge from the modern world that empowers young people to think critically about the positive and negative aspects of technology and about the benefits of time spent in nature. They offer immersive stays of three, four, and seven days for adolescents from 10-15 years old.

Quarry View has been awarded a contract for the renovation of the retreat’s existing buildings, including a historic log home from the mid-19th century and a large barn that will serve as River View’s activities center. We’re also building four new cabins to take advantage of the property’s natural setting.

Nestled in the Alleghenies’ Black Valley adjacent to Buchanan State Forest, River Mountain Retreat rests at the base of Tussey Mountain alongside Sweet Root Creek. River Mountain’s property includes 1.7 miles of creeks, perennial streams, seeps and wet meadows, all flowing into Sweet Root Creek. Restoring Sweet Root Creek, a tributary of the Chesapeake Bay watershed to its pristine ecological state is an important mission for River Mountain, as well as a wonderful environmental educational opportunity for young people.

The River Mountain property is in Southampton Township, Bedford County. The farm lies in a narrow valley between Tussey Mountain and Warrior Ridge. According to the history of Southampton Township, the “Warriors Path” ran between Warrior Ridge and Tussey Mountain along Sweet Root Creek toward the Black Valley Gap. The Warriors path would have been on the eastern edge of the farm and would have been one of the important Native American trails running through central Pennsylvania. These trails were part of a network that the Iroquois (Five Nations) used to travel from central New York to the Carolina mountains.

Deed research traces the River Mountain property to the mid-19th century as a working farm under various owners through the 1970s. It’s now owned and operated by River View Retreat’s Ryan Tyrrell and his staff.

Nearly every child under 8 years old in America (98%) has access to a mobile device at home and kids and teens represent one-third of all internet users worldwide. Parents, teachers, the media, and even the leaders of tech companies themselves are expressing growing concerns about the role increased screen time plays in depression, anxiety, and even suicide among young people.

River Mountain is a first-of-its-kind outdoors retreat centered around lessening the need for devices and screen time, and more time in nature. The curriculum, developed in partnership with Penn State University, helps children develop a healthier relationship with technology and make positive choices regarding the way they spend their time. Immersive stays of three, four, and seven days at River Mountain will give children the tools and skills they need to break from unhealthy screen habits. River Mountain opens its doors to young people in the spring of 2020. 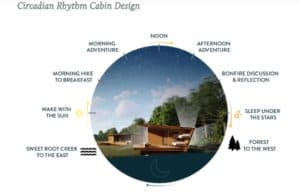 Quarry View will be working with River Mountain on two beautiful, historic structures that will be restored/renovated to accommodate programming needs. The Old Log Home on the property, ca. 1840-1860, is a two-story building consisting of horizontal logs with mud chinking between the logs, small windows, gabled roof and a brick/stone chimney at the east side of the house. The foundation comprises fieldstone with mortared joints. The home sits on a hill above Sweet Root Creek adjacent to one of several natural springs on the property. 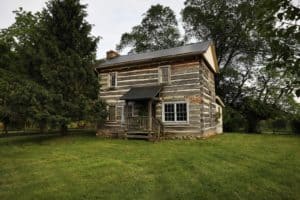 The Main Barn on the property was constructed in the late 19th century and is best categorized as a “Basement Barn.” The access points at the basement level are at the gable ends (north and south elevations) with a center aisle running in the middle of the barn, and the building was probably used as a dairy operation. The upper level of the barn consists of wooden beams (some scarf joint), rafters and flooring. The renovated structure will serve as River Mountain’s indoor activity center. 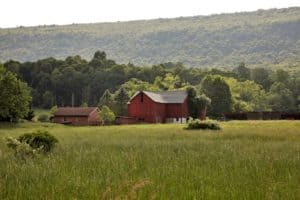 Quarry View will be constructing four new cabins in one of River Mountain’s back pastures. The cabins are designed to enhance the body’s natural circadian rhythm. With all glass in the front and facing to the east, campers will wake up with the sun in their face and with the backside of the cabin at the edge of the tree line and the creek, they will go to sleep with the sounds of nature. 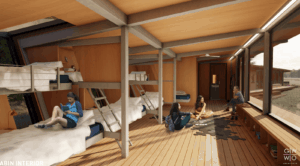 Quarry View Building Group is excited to work with the owners and staff of River Mountain on the construction of a facility that helps young people get back to nature. With our Amish roots planted in the soil and expertise in the building and restoration of agrarian structures, we’re proud to be a part of this one-of-a-kind project.