Old is new again at the Schwenkfelder Library and Heritage Center. They’ve partnered with Quarry View Building Group to dismantle, transport and rebuild an early-19th century barn as part of a major expansion of their facility in Pennsburg, Pennsylvania.

The Seipt family had actually arrived in Philadelphia in 1734 as part of a wave of German immigrants searching for the freedom to practice their Christian religion. Referred to as the Schwenkfelders, the group settled primarily in southeastern Pennsylvania. They excelled as farmers and were quickly known as a group who valued their faith, family, hard work, and were good neighbors.

The Schwenkfelder Library and Heritage Center (SLHC) preserves and presents the history of the Schwenkfelder Church as well as the region. More than 9,000 visitors are welcomed each year at the SLHC. Filled with a massive document and book collection dating back 200 years, SLHC also conducts genealogical research and offer over 100 educational programs yearly to children and adults.

Once the entire expansion is complete, SLHC will increase the size of its museum by 50% . The center’s success has caused it to outgrow its exhibition, education, storage, research, and conservation space. In addition to the barn, a two-level, 12,150-square-foot addition will be built.

Filled with the knowledge of barns passed down through generations of Amish craftsman, Quarry View Building Group has been hired by SLHC for the barn project. Quarry View will painstakingly label, photograph and map the entire layout of the barn and its interior timbers, and then carefully dismantle and move the structure from the Seipt family home in Towamencin and move it to the SLHC Pennsburg site in Pennsburg. The barn is from the homestead of Honorary Campaign Chair Fred Seipt of Lansdale. Finally, it will be disassembled, relocated, restored and made accessible to visitors via a walkway from the main museum building. 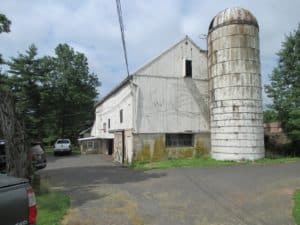